First Look: Woolloomooloo’s the Old Fitz Is Back With a New Outdoor Area and a Young-Gun Chef 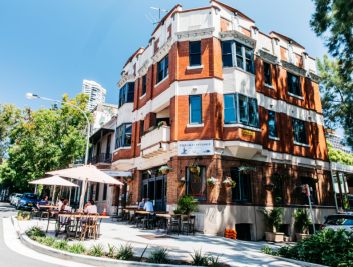 The updated boozer has a former Momofuku Seiobo chef in the kitchen and a fresh al fresco drinking space – but the essence that’s made it a local legend for more than 150 years remains.

“When a building has had so many iterations, you want to make sure you can contribute something meaningful to it,” Anna Ugarte-Carral tells Broadsheet, a week into her gig as head chef at The Old Fitzroy Hotel, and almost a year after the boozer (then under different licensees) closed to patrons amid the chaos of Covid-19.

With Ugarte-Carral’s impressive resume – not to mention that of the Old Fitz’s new operator, Odd Culture – there’s no doubt this new iteration of the 150-year-old Woolloomooloo pub will be a standout. Odd Culture is the group behind The Oxford Tavern and The Duke of Enmore (it also has a new joint slated to open in Newtown’s former Happy Chef space early this year); it knows its pubs – and its beer. And with years of experience at Momofuku Seiobo as junior sous chef, plus stints at Noma in Copenhagen and Lyle’s in London, Ugarte-Carral knows her food.

If you were concerned Odd Culture would come in and strip all the things locals love about the Old Fitz, fear not. The group has maintained the pub’s historic features, with a few updates to help the old bits shine. Some of the furniture has been updated and the kitchen has been zhooshed up, but the most notable update is the new 100-seat outdoor-dining area. It’s the perfect place to sip beers and vino from afternoon into evening and snack on Ugarte-Carral’s lofty pub grub. The space looks essentially the same, but that’s the beauty of it.

“I used to come here quite a bit when Nick Hill was the head chef [under the pub’s previous licensees]. I’ve always loved it as a pub. A lot of my friends from uni were involved with the theatre; its history is special,” says Ugarte-Carral.

“Before we opened, everyone from the area would always pop by and check in on what was happening. It’s been a big combination of locals coming back for the first time in a while, but then a lot of new people who just want to go to a good pub with tasty food.”

For starters there’s kingfish terrine, borlotti beans with honey bug, and tomato on toast; the mains include steak frites, and blue mackerel with cavolo nero and mustard. Sweet options include little Sarah Bernhardt cakes (named for the French actor, they’re made of a biscuit topped with ganache and covered with melted chocolate), at four dollars a pop.

“It’s nice not to be constrained by the trappings of fine dining, and to cook things as exactly what they are instead of trying to really wow people with layers and layers of different things on a plate,” says Ugarte-Carral, who comes off the back of a big 2020. While Covid-19 put a halt to her plans to move to Spain, it also saw her and a group of mates start Ten Hats Bistro, a series of monthly food, drink and music experiences. And, of course, there’s her new gig at the Old Fitz.

On the drinks front, it’s “all very delicious”, says Ugarte-Carral. There’s a healthy beer menu (Odd Culture gets its name from the group’s former beer bar at The Taphouse in Darlinghurst), plus a selection of wines ranging from “approachable and tasty” to ones for “people who enjoy being challenged”, including a good range of natural options.

Odd Culture is also renewing its focus on the pub’s theatre, which is operated by Red Line Productions. “The theatre is quite honestly the reason we took on this project. Incredible human beings, doing quite groundbreaking things,” James Thorpe, the group’s owner and general manager, told Broadsheet in January. “We see our role in the pub to support them as much as possible, but have very exciting plans to more integrate the two arms together.”

Upcoming productions include Eugène Ionesco’s Exit the King, Samuel Beckett’s Happy Days and Michaela Coel’s Chewing Gum Dreams – the precursor to the I May Destroy You creator’s first TV show, Chewing Gum. Thorpe says dishes will occasionally be crafted to complement what’s showing in the theatre. “It’s a fucking theatre pub after all – and the only one in Australia at that.”